Some entries are Friends Only, some are public.

This is a comment on a post about long haul Covid management.
"8 months ago (edited) me too! cocoa, cinnamon, cloves, NAC, for anti-oxidant protection, and caynne capsules for blood clots and repairing the damaged lung tissues; bht for killing the virus and prevent re-infection. himalayan pink salt neath the kidneys, head, and back prior to bed will stop the lower back/ kidney/head pains. noopept for repairing neurological damage, stroke induced damage, and increasing endogenous anti-oxidant activity in the brain and CNS by 340%; one 2-3 milligram dose healed the pain in my head after just an hour or so. its about $25 for a 6 year supply.combined with NAC its even more powerful."
"You also don't hear much of anyone warning people that they should wait 3 months or more before getting the jab if they've been recently infected with covid to prevent a hyper inflammatory response to the vaccine. I haven't seen anyone on TV even talk about this." 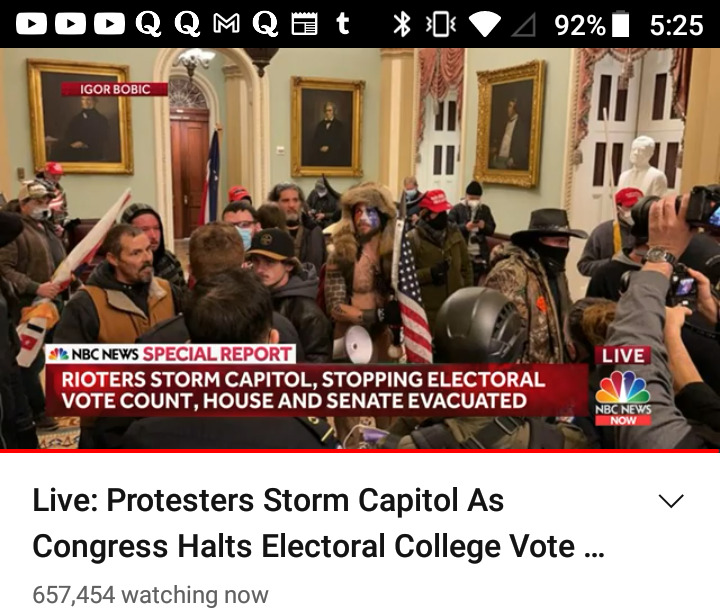 Just how can he do this, they must have been planning it, wth.

Liz Cheney is a republican, she called it, the Prez just is not going in the way of peace. The country has a right to a peaceful transition.

The District of Columbia is finally arresting people.

She is a clear voice speaking here. I don't think a bunch of people are following her necessarily. But she's a republican making sense. You don't tell murderous protesters, you love them and support them. He's crazy.

Edit: Police in large numbers have entered the Capitol, and are being met with resistance. I was wondering how many have guns, if two people have been shot already.
The mayor of washington had asked for federal troops to backup, but the Pentagon refused to do that. She asked for surrounding communities to send extra police officers, and they are there now, helping control the protesters. Trying to arrest them I think.

Okay, I have no idea how to read the comments on posts here anymore! Everything seems to be working well, posting is a lot easier, reading peoples posts works much better than on the iPad. But I'm not seeing the comments themselves, just the number of them that are there. Okaaaaay.

I found myself looking for phone wallpapers today, of all things. I found a few, dig up one of my journal covers from this account, then someone in my subscriptions posted a photo of all the coins they found while magnet fishing in England. That made a good one. I finally put up a modified photo of bubble wrap. Lol.

It is probably the hottest part of the year here, very humid too, as usual for this area. We are five miles from the Ohio River, rather large one. It separates the whole Eastern half of the US, we are just barely in the northern half.

I think that is one of the reasons it gets so humid, too. I have not been downtown in at least a year, I think. But the river is accessible from downtown, and they have put in a new riverfront area, with picnic and playground and park areas.

I am a bit reluctant to go, though I do need my ID renewed, and I can get it done there. I do need groceries before I do anything though. I think I have an egg, beans and oatmeal.

I think I will come back and edit in a magnet fishing video.

Edit August 30, now I get the replies I think.

I am missing the library computers, the library ...and the $1 earbuds you could buy. I only ever got 4 or 5 over the years, through loss or using them for something else at home. But they fit in the ears reasonably well, lasted almost forever, and we're darned convenient.

Being able to sit at a PC and use a mouse and a keyboard, instead of the dang little virtual keyboard on the phone, that was nice. I don't know why I don't get it together and get keyboard and mouse, and sit up at my desk I don't know, or that would be telling. Sigh.

I am eating oddly sometimes, I sure don't go to restaurants any more, you can't sit there and it's so nice not to be in the habit of eating junk food that I am willing to mostly drop the habit. I did go get a pizza on my birthday, but ate it too fast, glad I don't get pizza too often. But they're easy to make and I could just get flour tortillas and use them instead of a thick crust, or just make my own thin ones, and put healthy stuff on them. I made bread starter starting maybe 6 weeks ago. It's okay, but I feel like I can only make sourdough with it, it is just not going to make a fluffy bread. But it's easy and sourdough is still pretty good bread.

Not sure why, but as I was typing that, I thought of how people tend to have grammar questions sometimes, such as when to use "who" or "whom", or things like that. I just watched a YouTube video that a lot of young people seemed to be watching, and the announcer actually used the phrase "had began" instead of "had begun", which is always correct. "Had ran" is another one that young adult YouTubers seem to use. It seems so stupid, though everyone understands what the person means, had run. Years ago I would have thought only people who had hardly any education would say that.

What occurred to me is that I have thought many times over the years that it would be good if we had been allowed to keep our school books, that people who had grammar questions or Science or math, could easily look things up. A lot of times people will correct each other in comments, and sometimes there is even some controversy or argument, but having the basic book would solve some of that.

But it sure would take up a lot of room. Another thought on the matter is that if there were a common database, instead of just many private sites, it might be simpler. But it would probably be government sponsored. It would be nice to have something like Wordipedia.

There was a small discussion at one YouTube video on the correct spelling of "jewelry" versus "jewellery". The first spelling is USA and Canada, the second is original English/UK.

I looked up the average temperature for this time of year for this area,since it seems very hot very early. Today was at least 92 Fahrenheit, but seemed hotter. Usually it is between 75-85.

So it is far above average, too hot. It almost seems like the fan is just pushing the hot air around.

I finally started to clean it today,got a good start. It has been an embarrassingly long time since it was done.

There are fireworks still going on, as usual for this time of year, people keep it updating in my area.

I watched a video on stoves, the kind you take with you camping. There is a channel called CheapRVliving, for older people who are tired of all their money going to rent, so they decide to live in their car. I saw a stove like one my parents had, they took us camping in Michigan and Canada. Also he had a couple examples of Rocket Stoves, which just use small bits of twigs as fuel no bigger around than your thumb. Just bits of stuff you find lying around. You can build one easily with just bricks or stone, though some people are more elaborate and make them with concrete.

One of the stoves tested was a nice looking green metal one. I think the guy was overwhelmed with too many stoves to test, but he admitted that and it was all fun anyway.

Livejournal seems to be working well on my iPad, so I might as well post. We have internet at home now, so maybe that is it. The library closed around the end of March, and for a while I was going to the little park area behind the library to get internet, then at home I asked what that thing is that looked like a computer tower was, it showed up in a corner in the living room which we do not use much. Internet, wifi. Hallelujah. I wasn't paying for it, but sis gave me the password because she didn't want me going out in the cold unknown, and get sick. Hallelujah.

And I am still alive!

And I can read my friends page, which barely came in at all when I was online at the library park and Wendy's parking lot (fast food, burgers).

I don't think I am doing much different but staying in a lot, need to go to the grocery store. There was a fair amount of things like flour and rice finally, that they had not had there in a while--that was last week or so.

I am even out of butter and oil, but have rice and some flour, cereal, just ran out of milk.

I misplaced my wallet, almost has to be somewhere in my room, but it is very frustrating! I need to do laundry and vacuum, even shower--after I eat!

Edited to add, we have brand new neighbors who are really on fire, ripping out bushes,
Tearing siding off the house, going to tear out the bathroom, kitchen, summerhouse(sort of a picnic shelter). They asked me if they could tear out a shrub next to their driveway, but just on our side. I am sentimental about it, but said I would ask bro and sis about it. They don't care, turns out. So. It can go, it keeps getting branches over in their driveway, and doesn't grow much on their side. It's a boxwood, possibly a volunteer from a couple streets over where there was same in front of a funeral home. At least fifty years old. But we have plenty of shade in the yard, and it it is definitely in their way, why make them keep cutting it.

my sister's birthday meal, she really likes it